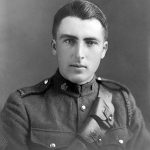 This year marks the 100th anniversary of the Battle of Passchendaele. Here’s an excerpt from an interview I conducted in 1985 with my grandfather, Stan Cochrane (left), a gunner in the 3rd Division, CEF, in 1917-19:

SC: That Passchendaele was the worst of any place I ever saw in my life.

SC: Just a sea of mud – just an absolute sea of mud. If you got an animal off that plank road they laid down, and… The old road, you could still travel on it, but you’d be up to your knees in that watery mud, you know. But the plank road was laid down so that these, uh… big motor lorries, they’d go up as far as they could go on these plank roads, you see, because it was fairly solid for them.

It was muddy on top but not enough to bother you. Mules would run right over it, they’re sure-footed, too. They can go any place a man can go – if you can walk on a log, they can walk on that log behind you. A horse is not that way; they will slip and fall.
But that road, going up that road there, in Passchendaele – that had to be done in daylight, because at night you couldn’t see where you were going. You’d get in the mud and you’d never get out. They had to do it in the daylight, and they [the enemy] could see every move on that road you know, with their balloons.

That road was just bumper-to-bumper, just like some mass movement around here on foot, I mean here in a town or city. It was just a mass of all kinds of vehicles of that kind, and we had the mules, with a lead team to haul them with their backs loaded down with ammunition to deliver to some battery, you know, along the line, and that plank road was just full of…

There was a shell come over every so often, the shells would come over & hit and everything would fly in the air in pieces, tanks and mules and men and anything else. But you daresn’t stop, they had to keep going right steady, no stop was made — you just keep going that’s all, and if you happened to be in an unlucky spot, you got it, that’s all there was to it.

A few years ago I posted a web essay about his WWI military service on Flickr: